ROCK64 is a credit card sized Single Board Computer powered by Rockchip RK3328 Quad-Core ARM Cortex A53 64-Bit Processor and support up to 4GB 1600MHz LPDDR3 memory. It provides an eMMC module socket, MicroSD Card slot, Pi-2 Bus, Pi-P5+ Bus, USB 3.0 and many others peripheral devices interface for makers to integrate with sensors and devices. 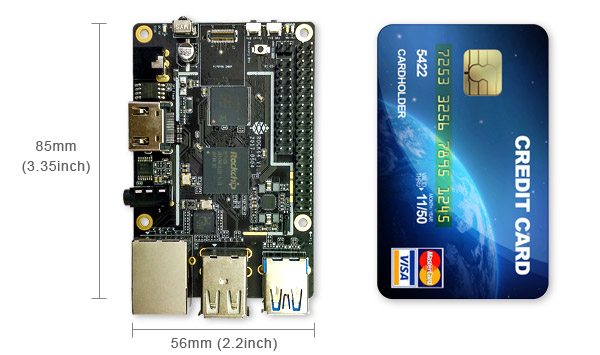 Community backed, open spec single board computers running Linux and Android sit at the intersection between the commercial embedded market and the open source maker community. Hacker boards also play a key role in developing the Internet of Things devices that will increasingly dominate our technology economy in the coming years, from home automation devices to industrial equipment to drones.

This year, we identified 90 boards that fit our relatively loose requirements for community-backed, open spec SBCs running Linux and/or Android. This is up from 81 boards in our similar catalog of hacker boards, posted June 1, which was followed later that month by a survey in which readers picked their favorite boards. A year ago in our New Year’s catalog we showcased 64 boards, up from 53, 40, and 32 entries in our previous reports.

Our annual winter round-up does not include a reader survey, which acts as a mid-year update, but below you will find individual summaries of all 90 SBCs with the most recent prices and updates. We also supply links to LinuxGizmos coverage and project websites, plus an extensive comparison table of major features of all 90 boards.